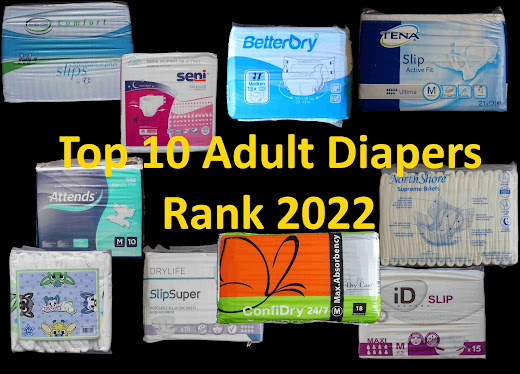 Seasons greetings! Now coming on three years since we began reviewing adult diapers we've completed 48 reviews, nearly doubling the number of reviews used to determine the 2021 top 10 adult diaper rankings. Additionally, we've done our first review of reusable protective underwear, giving a completely different product perspective. Many of the diapers that ranked highly in our previous review continued to take the overall top 10 ranking with the Seni Super Quartro, BetterDry/Crinklz, Tena Slip Active Fit Ultima and ConfiDry 24/7 continuing to dominate the top spots. However, there were substantial shifts in the individual ranking categories for Absorbency, Comfort, Durability and Discretion with more specialty diapers tested in the previous year.
For this year's rankings we will be using the same scoring formulas as were used in the 2021 rankings but we now only take the top product for each brand to fill out our overall rankings to reduce repetition. We've also merged similar product lines of differing absorbency like the Tena Slip Active Fit Maxi and Tena Slip Active Fit Ultima in the individual ranking categories. However, for this review we've included a table at the bottom with a direct comparison of the ratings for every product reviewed. I understanding this isn't a perfect solution to compare statistics but hopefully it will make product comparisons at least a little easier for the time being. We've received a lot of feedback around making these statistics more accessible and when I have the time and funds available promise I do plan on building out a website to make these comparisons much easier.
We were hoping to review some more diverse products this year like boosters and protective underwear, but have been surprised by the number of adult diapers on the market and prioritized those first, so maybe next year. Moreover, these reviews take a surprising amount of time/effort so we really appreciate the feedback we've received over the previous year! We also want to give a special shout out to Night and Day LLC and Carer for providing the Nexgen diapers and reusable underwear samples used in this year's reviews!
Since we launched our suggestion form last year we've received a number of great suggestions. We've managed to get through quite a few of them, but some have proven to be quite expensive or nearly impossible to order from Canada. If anyone is interested in helping contribute to our next reviews we've compiled some Amazon wish lists that include the review suggestions or similar products. Alternatively, if you'd like to help support our reviews at no cost simply use our Adult Diapers affiliate link when you make your next purchase of incontinence supplies through Amazon. Any help would be greatly appreciated!
p.s. Amazon.ca has the best shipping rates here, but relatively limited product selection, apologies if there are shipping costs on the others
Amazon US Review Suggestions Wish List
Amazon Canada Review Suggestions Wish List
Amazon UK Review Suggestions Wish List
Amazon Italy Review Suggestions Wish List

The absorbency ranking is based on the same scoring formula described in the 2020 top 10. The formula accounts for average absorption during testing, the amount absorbed per area of padding as well as other characteristics that improve performance in this regard. It produces a score between 1-10 with higher scores indicating better absorbency performance. Rankings narrowed further this year with the review of more high absorbency ABDL oriented diapers, but a few of the products from last year's review retained a spot in the top 10. Notable runners up include the Drylife SlipSuper, Abena Abri-Form M4 and NorthShore MegaMax.

The comfort ranking is also based on the 2020 rankings formula. This formula accounts for aspects of performance like surface dampness and breathability. It also accounts for scoring on comfort in dry and wet states and padding softness. There were four new additions to this year's rankings for comfort but the Seni Super Quatro retained its top spot. Close runners up included the Forma-Care X-Plus, Prevail Air Overnight, and Molicare Slip Maxi.

In this year's durability ranking we've reused the adjusted formula from the 2021 durability rankings. This formula accounts for how much padding is destroyed after extended wear/tear, how well the tapes hold up and whether the padding is prone to clumps or tears. Interestingly enough most of the diapers from last year's review retained their durability ranking, with a bit of movement near the bottom of the list. Also of interest is that there seems to be some correlation between absorbency and padding durability, but it didn't apply universally and the premium European diapers generally held up best.

The discretion ranking formula remains unchanged from the 2020 top adult diapers formula. This ranking measures overall discretion. It accounts for the bulkiness of the diaper, how noisy it is, whether it is prone to odors and how far it rides above the waistline. To a lesser extent it accounts for the fact that less absorbent diapers will be more discreet when dry but will be glaringly obvious if they leak. The top discretion rankings tend to be lower than other areas because of competing attributes. For instance, plastic-backed diapers tend to be better at reducing odors, yet the plastic-backsheet contributes to more noise. There was some notable movement on this list compared with last year, with the Egosan Ultra, Lille SupremFit Maxi and Attends Slip Regular Plus just barely being bumped from the top 10.

This year's top 10 overall ranking again follows the formula used to calculate the top 10 from 2020 and 2021. The formula combines scores for absorbency, comfort, durability and discretion to produce an overall ranking. One thing we've changed in this year's ranking is that we've limited this ranking to only the best of each brand. This is intended to reduce any biases and give readers a greater diversity of diapers to evaluate in case a particular brand isn't available locally or has an awkward sizing. Notable, the Seni Super Plus, Tena Slip Active Fit Maxi, Tena PROskin Flex Maxi, NorthShore MegaMax and Attends Premier Briefs Overnight also attained scoring that would put them among these top 10 but were not the top performers under their specific brands. Once again, the value you find in these rankings will depend on your personal needs and preferences, if a particular product aspect is of high importance to you then you may find the rankings above more useful to suit your needs.
There was less movement than expected in this year's overall ranking when compared to the 2021 rankings. Likely, at least in part, due to the way I prioritized the earlier reviews. The top 5 remained unchanged owing to their strong performance in all categories. Nevertheless, there were two new additions to this year's top 10 ranking with the ABU PeekABU coming tied with the Drylife SlipSuper for 6th place and the Forma-Care X-Plus M4 bumping its way to 9th. There was far more movement below the top 10 with all the new reviews bumping previous poor performers further down the list. The gap between the top of these 10 and bottom further narrowed this year, while the total difference between the top and bottom rated diapers remained the same. Once again, the Seni Super Quatro topped this list with a score of 8.57 and the Attends Care Waistband came in at the bottom of the list with a score of 4.04. These scores were adjusted slightly lower from last year's scores as the addition of new diapers stretched previously established scales in areas like absorbency, reducing the relative scoring of the others.

All Tested Diapers by Overall Rank

I've compiled the scores in each category for all the diapers tested so far into the list below. The list is sorted by overall ranking from the top to bottom scoring diapers. All reviews were conducted on medium-sized diapers unless otherwise specified.