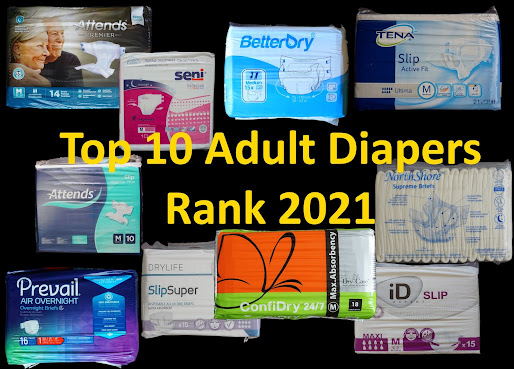 With 26 adult diaper reviews completed over the past year and a half we have far more to assess than were available for the 2020 top 10 adult diaper rankings. Compared to last year's rankings only the BetterDry/Crinklz, iD Expert Slip Maxi (PE), Tena Slip Active Fit Maxi and ConfiDry 24/7 were able to hold their ground in the overall rankings that account for absorbency, comfort, durability and discretion. However, many of the diapers that fell down in overall rankings still held up in the individual categories.
For this year's rankings we will be using the same scoring formulas as were used in the 2020 rankings with a slight tweak to the weightings in the durability scoring (see figure 1.1). We've also left the Tena Slip Active Fit Maxi out of the rankings this time due to its similarity to the Tena Slip Active Fit Ultima with the Ultima being a little more absorbent. Our rankings aim to provide a high degree of objectivity while still accounting aspects that are harder to capture like comfort.
Over the next year we have some exciting new high absorbency adult diaper reviews planned including some ABDL favorites. We will also start reviewing a more diverse set of products including booster pads and protective underwear so expect additional categories in next year's rankings. Product suggestions can now be made via our suggestion form. These user suggestions will soon be listed on a suggestion tracking page and updated as they progress for review. If there's interest, we're hoping to accelerate certain product reviews via donation as we've started breaking into more expensive review categories.

The absorbency ranking is based on the same scoring formula described in the 2020 top 10. The formula accounts for average absorption during testing, the amount absorbed per area of padding as well as other characteristics that improve performance in this regard. It produces a score between 1-10 with higher scores indicating better absorbency performance.

The comfort ranking is also based on the 2020 rankings formula. This formula accounts for aspects of performance like surface dampness and breathability. It also accounts for scoring on comfort in dry and wet states and padding softness.

As described in the intro, the durability ranking formula has been slightly altered from the 2020 durability ranking. This only moderately affected the scoring. This formula accounts for how much padding is destroyed after extended wear/tear, how well the tapes hold up and whether the padding is prone to clumps or tears.

The discretion ranking formula remains unchanged from the 2020 top adult diapers formula. This ranking measures overall discretion. It accounts for the bulkiness of the diaper, how noisy it is, whether it is prone to odors and how far it rides above the waistline. To a lesser extent it accounts for the fact that less absorbent diapers will be more discreet when dry but will be glaringly obvious if they leak.

The top 10 overall ranking again follows the formula used in the top 10 ranking from 2020. This formula combines the scores for the above 10 rankings and produces a new score that averages them. It gives a little more weighting to absorbency and a little less to discretion. You may notice some difference in the scoring between this and last year's rankings, that is because some of the metrics use relative scoring so as more products are added the top and/or bottom performances may change (e.g. if a diaper with less absorbency than any tested in the previous year it will nudge up the rankings of the others relatively). How valuable you find this ranking will depend on your own personal preference and, if one aspect is of high importance to you, the rankings above may be more helpful in finding the product that best meets your needs.
This year the Seni Super Plus and BetterDry/Crinklz were virtually a tie for first, with the Seni diaper gaining a slight edge in the non-absorbency categories. The Tena Slip Active Fit Ultima retained last year's 3rd rank given to the Tena Slip Active Fit Maxi (the Maxi was not included in this year's rankings but would have ranked 7th with a score of 7.96 here, had it been included again). There was far less of a difference between the bottom and top score in this year's rankings as there are now many more diapers to compare against. The Seni Super Plus topped the list with a score of 8.69, while the Prevail Air Overnight inched into the bottom with a score of 7.40. Outside of the top 10, the Attends Care Waistband diaper retained the worst rating with an overall score of 4.10.