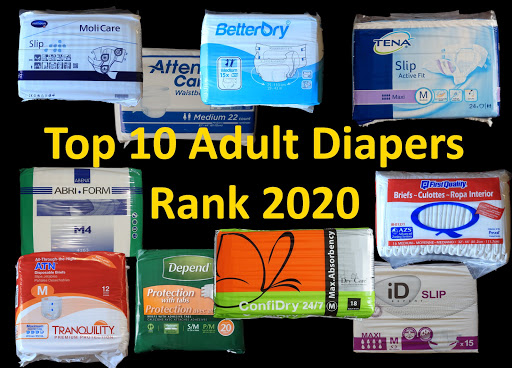 With 10 full adult diaper reviews completed I've started crunching the numbers to evaluate some metrics for this diaper metrics blog. My previous reviews included a mix of adult diapers with many of the best on the market, but also some cheaper-to-mid range diapers. All diapers reviewed so far are plastic-backed, however, in the next series of posts I will start including more diapers with cloth-like backsheets together with more premium plastic-backed diapers.
To better assess each diaper for its individual strengths as well as overall performance they have been evaluated according to 4 different criteria: absorbency, comfort, durability and discretion. To reduce my scoring bias I've written several formulas to balance the weight of my personal scores against more objective measurements. This way my ranking accounts for easily measured aspects of performance like absorbency as well as harder-to-measure aspects like random leaks experienced in real world settings. All scores have been normalized from 0-10 to give an idea of how each performed relative to the other and this ranking system will continue to be used to update the top 10 as future reviews are added.

The absorbency ranking was calculated using the formula in figure 2.1. It combines the scores I personally assigned to each diaper based on experience with the average total absorbency across each test and average absorbency per unit of padding ratio. These measures will give weight to a diaper that can absorb a huge amount as well as one whose padding is highly efficient at absorbing moisture. Additionally, I give a small amount of weighting to diapers with leg gathers and inner leak guards for the value these provide in preventing leaks. I also give a small weight to the average used percent of padding across all tests because this is reflective of the diaper's wicking ability.
ab: average total absorbency between lab/stand+sit/lying down tests
ar: average absorbency ratio between lab/stand+sit/lying down tests
st: standing/sitting score
ld: lying down score
lg: leg gathers = 1, none = 0
ig: inner leak guards = 1, none = 0
ud: used percentage

The comfort ranking was calculated using the formula in figure 2.2. It combines my personal scoring for different aspects of comfort with padding area and absorption time. Of the rankings calculated here this is the most biased toward my personal ranking as measures of comfort are tough to quantify. I've attempted to reduce any bias by including the surface dryness rating, which is reflective of the laboratory tests and the formula gives a lower ranking to diapers that demonstrated slower absorption times as it would result in the wearer feeling dampness for longer after a wetting. On top of that I'm giving more weighting to diapers with a larger padding area because padding contact with the skin typically provides better comfort than contact with the backsheet.
pa: total padding area
at: average lab wetting absorbency time
ds: dry comfort score
ws: wet comfort score
sd: surface dryness score
es: ease of use score

The durability ranking was calculated using the formula in figure 2.3. It gives equal weighting to my personal assessment of durability and quantifiable diaper metrics. The ranking is weighted a little more toward assessing the diaper's dry durability performance since the wearer would typically spend longer in a dry diaper than a wet diaper, particularly in cases where durability is important. I also give a small additional weighting to diapers with waistbands because I've found these can provide a snugger fit and reduce factors that cause deterioration. This ranking also leans heavily on the dry durability test whereby the diaper is worn in its dry state for an extended period of time with modest activities and the proportion of padding that has deteriorated is calculated at the end of it. Moreover, I give the wet diaper shake test a relatively small weighting as I've found it isn't particularly reflective of durability in reality.
ta: total tape area (how much tape attaches to backsheet)
dd: dry durability score
wd: wet durability score
st: shake test (number of shakes to deterioration after lab capacity test)
td: topsheet deterioration percentage after dry durability test
bd: backsheet deterioration percentage after dry durability test
wb: has waistband [front/rear = 1, rear = 0.5, front = 0.5, none = 0]

The discretion ranking was calculated using the formula from figure 2.4. A large part of the weighting comes from the scores used to assess how the diaper performed in terms of reducing odors, how much noise it produced and how easily it could be concealed. Those scores are given equal weighting so a diaper that might not otherwise seem discrete due to bulkiness can rank higher because it's quieter and better at reducing odors than thinner ones. Although this rating leans toward my personal rankings it also assesses objective metrics including how high the diaper rises above the wearer's waistline and the folded diaper's dimensions (thickness/length/weight), which may be important for a hiding the diaper in a bag or purse. I also gave some weighting to how much the diaper will swell when wet, because this may result in a diaper bulge becoming visible after a wetting.
ds: profile discretion score
ns: noise score
os: odor reduction score
dw: dry weight
fl: folded length
wt: wet folded thickness
ar: average rise above waistline
dt: dry folded thickness

Different people have different needs when it comes to adult diapers so it's hard to give a conclusive overall ranking. Some may prefer a diaper that's more discrete even if it comes at the cost of absorbency, while others only wear for bedwetting and will want a diaper that provides the best protection with no care to discretion. In this regard I hope the above category rankings are helpful. Another consideration is price, which varies greatly by region so I've left it out of my ratings. To calculate my overall ranking I take all 4 of the above rankings and combined them by my own interpretation of value to the wearer with a little more weight on absorbency and a little less on discretion (see figure 3.1).
Looking back at the above rankings I found there was a huge range in performance when it came to absorbancy but far less when it came to discretion (probably because I only assessed heavy incontinence adult diapers in this ranking). In most cases the best performing diapers were also the pricier ones, as expected and overall the BetterDry/Crinklz diaper was the clear winner. The scoring system gave a good sense of how similar the performance of each was, with this we can see the First Quality Briefs and Attends Care Waistband diapers were far worse at 4.63 and 3.69 points lower than BetterDry/Crinklz. Whereas the Tranquility ATN, while 4th from last ranking was only 2.1 points lower than the BetterDry/Crinklz (nearly twice as good by this measure). This is worth considering when accounting for the fact the ATN can often be found for half the unit price of some of the higher ranking diapers.
Posted by Diaper Metrics at 21:59